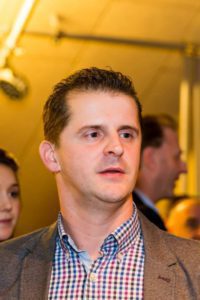 I graduated in 1997 as a mechanical engineer, performing maintenance on hydraulics and pumps. During my work as maintenance engineer in a factory, i discovered my interest in computers. After changing jobs a few times and following classes after working hours, i graduated as a programmer in 2007. If i look back to the year 2007, this was a very busy year for me and my family. We finished the new house and started living in our new home, later that year i married my wife.

Back to computer business, i started working in a large IT department as support engineer for a multinational cosmetics company. After several years of support i wanted to do more than just taking calls and creating tickets. Although this is a very important aspect for any company to provide a good helpdesk to the employee or customers, after some years as support engineer i wanted to move on to system engineer because as a support engineer i could find the root cause of an issue but i couldn’t resolve it myself. A lot of MS books and study hours later i became MCSE and began working as system engineer. In those days we did a Small Business server installation every week, some of the installations we performed back then required a lot “out of the box” thinking because of the difference in customer configuration. It was a lot of fun with the team, we struggled sometimes but had great times.

At the end of 2012 our network engineer was going to leave the company, they were looking for a new network engineer. No one applied for this job, so in the end i approved to pick up this task. I’m eager to learn new things and because i want to know how things work, i again started reading how switches and AP’s work. Together with the books and on the job training i learned a lot new things. In the beginning i could only spend limited amount of my time as a network engineer because we only had a few network project. With the years passing by, the network business for our company was growing. During these years as a network engineer we were asked sometimes to troubleshoot wireless networks for customers, as always i started reading about it and discovered my passion into wireless networking. With this blog i wanted to contribute into the wireless community and join as CWNE